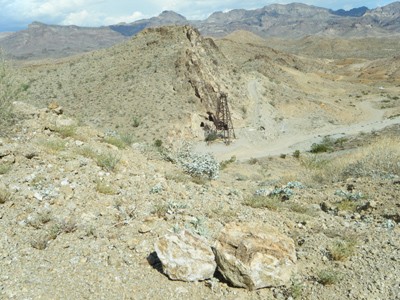 Good results continue at our Moss Mine project

Key Highlights: "With the results gathered from this initial exploration program, we are more excited than ever to establish a more detailed plan to further explore and map out the high potential mineralization zones surrounding Moss," said Bob Coale, CEO of Patriot Gold. "The prospects for additional discoveries of gold bearing structures are good which leads us to believe that the future may very well bring a much more in-depth drilling program to better test the potential for further discoveries on the Moss and Silver Creek claims. In the meantime, we will continue to report our findings and provide a more detailed analysis as we uncover more value in and around the Moss project site for our partners and shareholders."

Reconnaissance mapping of vein structures and alteration mapping on the unpatented Moss claims and Silver Creek property followed by rock chip sampling resulted in a total of 681 samples which were taken to investigate a number of vein trends on unpatented claims surrounding the flagship Moss deposit. Initial coverage was focused on prominent quartz carbonate veins and breccia zones. A number of the aeromagnetic and structural trends noted in an earlier report were tested while others still remain to be sampled.

The systems highlighted were the subject of a 681 rock chip sampling program. The samples were collected by professional prospectors with the objective of evaluating the lithology, mineralogy and structure of the identified vein systems both along and across strike. A significant number of samples showed evidence of gold mineralization with a portion having gold grades in excess of 1 gpt. This is an indication that a number of vein exposures on the property are auriferous at surface with others showing alteration and trace elements that indicate their surface expression is above the boiling zone where gold might be found in the system.

Highlights from the significant number of samples returning gold mineralization with assays in excess of 1 gpt include: 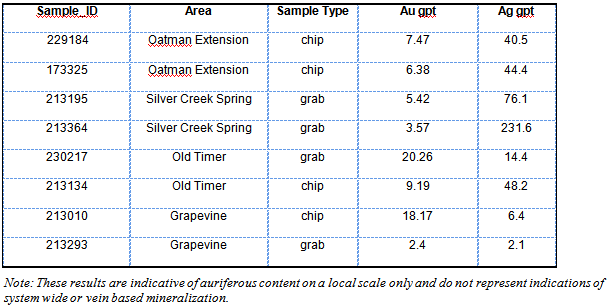 Due to the success of the current program in outlining areas of high potential for future exploration mapping, sampling and, eventually, drilling in the Moss project area, additional plans will be developed for a further mapping and sampling program to be carried out later this year. Several target areas remain to be sampled and others require follow-up sampling to further define their potential. Once this work is complete, the prospects for a property wide drilling program to test the potential for further discoveries on the Moss and Silver Creek claims will then be determined.