Key Highlights: "As we kick off 2015 and begin reviewing additional drilling program proposals for the Bruner project, we recognize the significant milestones we achieved with the 2014 drilling program," said Bob Coale, CEO of Patriot Gold. "As with earlier 2014 assay results, the last drill holes of the 2014 drilling program indicated that there is exploration potential beyond the initial historic resource areas that reinforces in the potential long-term commercial viability of this project. We look forward to providing continued updates on our advanced drilling efforts throughout 2015 as we move closer to fully realizing the long term value of the Bruner project."

With the last drill holes for 2014 complete, all drill hole data and related geologic information is currently being evaluated with an initial resource estimate expected to be delivered in the first quarter of 2015. 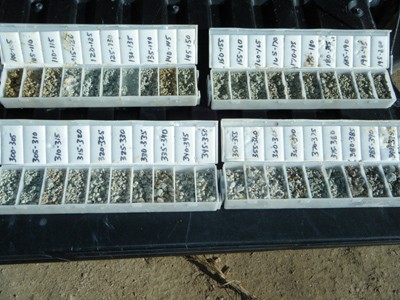 Further drilling is required to determine if the deep intercepts in B-1454C and B-1446C can be connected with the shallower intercept in B-1437. These intercepts are also open to the north. Follow-up drilling will be planned for 2015 to determine whether these deeper intercepts can be extended approximately 100 meters northward towards similar intercepts encountered earlier in reverse circulation (RC) holes B-1405 and B-1407.

Core drilling at the northeast extension of the historic resource area intersected gold mineralization across a 105.3 feet (32.1 meters) interval in the next-to-last hole drilled in the target area for 2014. Core hole B-1463C intersected 105.3 feet (32.1 meters) from 51.7-157 feet (15.8-47.9 meters) grading 0.010 oz/ton (0.339 gm/tonne) Au. This intercept is the last drill hole in this area to the northeast of the historic resource area with considerable potential to expand the resource further northward. A prominent gold-in-soil and coincident potassium alteration anomaly continues north of the intercept in hole B-1463C for over 600 meters. This potential area for expansion is located entirely on patented claims and will be the focus of a proposed drilling program in 2015.

The Bruner Project is situated in central Nevada, 15 miles north of the Paradise Peak mine, 45 miles northwest of Round Mountain and 25 miles east of the Rawhide mine. Historic production from the Bruner property included about 100,000 ounces at an average grade of 0.56 opt gold.